Psychology and faith, about which parables of Christ, from letters of ensign-artilleryman

Psychology and faith, about which parables of Christ, from letters of ensign-artilleryman

New Martyrs and Confessors of Russia New Martyrs and Confessors of Russia: Books, Lectures, Movies, Chants. They collected a lot of materials about new martyrs, in particular, several new ones: a mini-course of Father George Mitrofanov’s lectures, a collection of films, conversations and lectures and a number of other materials.

In the Cathedral of the New Martyrs and Confessors, in an understandable way, people turn to the personality of Nicholas II. About this – an interview with Sergei Firsov, a historian, a specialist in the era of the last king.

"Nicholas II" S. Firsov – the biography of the last Russian tsar. “Autocracy turned out to be a word not from political, but from theological vocabulary …”

See also “Church and Empire. Sketches of the Church History of the Epoch of Emperor Nicholas II ”- a collection of works by S. Firsov: The Church between two revolutions, ecclesiastical reformism, religious criticism of socialism, excommunication of Tolstoy, military priests, finances of the Church and other topics.

“What have we (not) been taught by the new martyrs, or How the Church comes on the same rake.” Vladimir Shallar. It seemed that the Church would flourish after liberation from the Soviet yoke. Not blossomed, and from the church official is increasingly heard so recognizable smell of "scoop". So what lesson have we learned and have we learned from persecution? “From the letters of ensign-artilleryman” – memoirs of the philosopher, participant of the First World War Fyodor Stepun. Artistically beautiful, philosophically deep, historically and biographically interesting text. The Christian philosopher about the war and the philosopher is not a cabinet philosopher, but philosophizing on the war itself, at war. Here, by the way, you can find a few curious features of the era of Nicholas II:

“No, I resolutely refuse to justify religiously or philosophically not the idea of ​​war, but its modern embodiment, and I refuse because I personally see how our“ Christ-loving ”soldiers are pulled off their pants and how they are whipped off with rods over their naked bodies,“ so that it will not happen ” . But why talk about flogging right away? Isn’t it enough that all our soldiers are scolded every day with the most disgusting curses and that they are constantly being slapped in the face? How is it so? People who have grown up to the inner necessity of the sacrificial feat, and under the satchel, and the first dirty word, and the teeth, and the rods … And all this sometimes an hour before the beat sends the dead to die and the death of hundreds of broken ones will achieve the rank or George. “A particle of freedom dies every day” – a collection of artistic journalism by the great Christian writer Heinrich Böll: about Christian literature, Christian politics, Nazism, capitalism and communism, the fate of the modern world. Brave, thoughtful, Christian look. Here are two quotes:

"One day the church will go astray enough to understand the religious problems of literature."

“The incarnation of man seems to have not yet begun; but it seems that Christianity itself has not yet begun; our churches still do not understand that there is love, although there are enough texts at their disposal that they could compare with each other — magnificent texts! As a result, only the ill-fated legal sophistication remained. ” 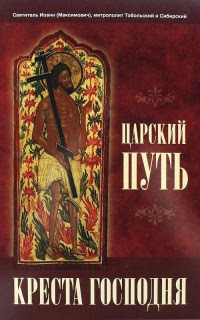 The book "The Royal Path of the Cross of the Lord" of Catholic origin. It was first published in Russia in 1709 in the literary reworking of the Chernihiv Bishop (later Metropolitan of Tobolsk) Ioann Maksimovich (1651–1715). Repeatedly reprinted. At the time of eldership in the Optina Hermitage, the fathers of Ambrose, Joseph, and Varsonophia were the favorite spiritual reading of monks and laity. The book is built in the form of a conversation (in the form of questions and answers) of the young Stavrofila and the Angel (in the Catholic version of Christ), who spiritually instructs and comforts Stavrofil. The translation of the book "The Tsar's Way of the Cross of the Lord" into Russian was made by the hieromonk of Optina Monastery Father Clement (Zederholm). “Early martyrdom. Translations, comments, studies "(transl., Comments, introductory art., App. And
total ed. A. D. Panteleyev) – new translations, partly for the first time in Russian. In addition to the texts of the martyrs themselves, here you will also find two articles about the relationship of arrested Christians with guards and the place of execution of Christians.

They published a collection of early works by Vladimir Solovyov, including his first major work “The Crisis of Western Philosophy” and a number of important articles.

Service instructions for the year 2019 of the Moscow Patriarchate Publishing House. "Job and Isaiah: multi-layered texts." Andrey Desnitsky. Last time, our imaginary friends, Skeptic and Retrograd, argued about the authorship of the Pentateuch. But these are not the only five books of the Bible, the authorship of which raises questions … so the debate continues!

“Is prayer for animals forbidden?” Igumen Silouan (The Mists): "If only love for their pets did not abolish love for people, which is too often found …"

"Are Christians jealous." Lesia Melnik. “They went to the sea, and we did not go to the south for the third year,” “Someone buys a three-room apartment, and we live in a rented apartment” … Which of us didn’t eat these thoughts? Let's try to find a recipe for envy.

"The personal body of each." Natalia Kholmogorova. Prolifers and other prosecutors, who hate each other, agree on one thing: hopelessness, pushing under the knife – it turns out, "her own business"! A purely personal problem that a woman should solve alone, without burdening society with herself or her child. "Proverbs of Christ: what they really are." It seems that we have heard the Gospel parables a hundred times and know them by heart. The well-known video blogger Archpriest Konstantin Parkhomenko will help to open these Christ's teachings in a new way.

"The image of baptism in art: from Giotto to Ivanov." The art historian Ivan Sablin will tell you how the plot of the Epiphany in the world art was displayed and on what nuances on famous canvases you should pay special attention.

"The baptism of Christ and the baptismal bathing." Archpriest Dimitry Sizonenko will talk about the meaning of the holiday of Baptism and common rituals.

"The problem of man in Christianity and atheism." The master of theology Dmitry Matveyev will try to understand what man and humanity are and what makes modern philosophical thought turn to him.

"The culture of ancient Rome: ideology and everyday life." Art historian Maria Grafova – about the rise and fall of the empire, its culture and attitude to Christianity. conference: Interaction without retraumatization: how to talk to the survivor and not to harm him; Psychological support for women in situations of prenatal loss and post-abortion syndrome; Sick faith: helping people suffering from neurotic religiosity; Basic skills of dialogue and recognition of psychopathology for clergy and parish workers: experience and prospects.

"Criteria for authentic spirituality". Spirituality is a concept, sometimes very vague. For some, this is all that transcends everyday life. There are people who believe that everything religious is included here, except – God forbid! – Christian piety.

Selected episodes of the program “More than love.” Famous novels and love stories. Stories of great love. We have chosen issues somehow related to Christianity.

We posted two audio recordings of Father Alexander I: a radio show about Moses and memories of the 60s.

We continue to spread the sermons of Father Augustine Sokolovsky: audio and lyrics.