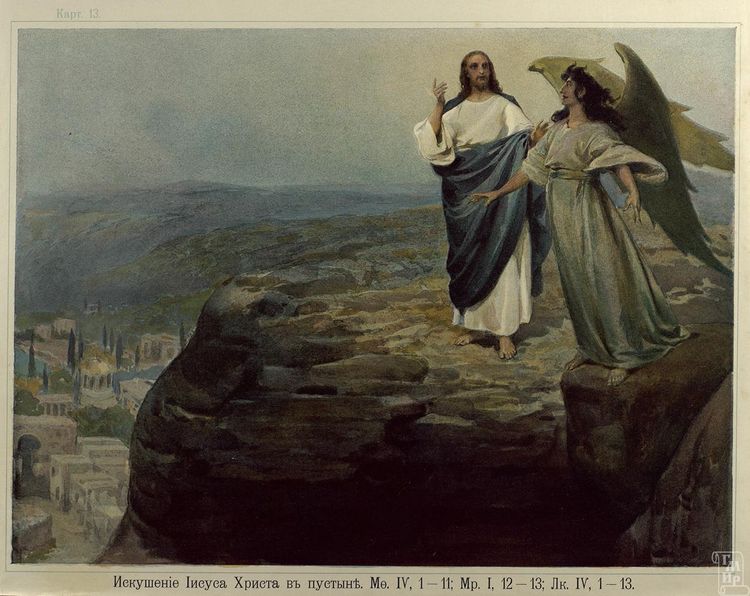 Nevertheless, in the Gospel Christ constantly casts out demons, and it is obvious that these are not just symbols. Christ expels some concrete power that works in people. What is this power?

Read the response to this article: Vadim Olenin "Theology on the knee, or Gleb Kapustin Syndrome"

Any believer, and even an unbeliever, knows the story of a fallen angel who rebelled against God. He started a war with him, which, of course, lost, after which he was cast out of heaven. This supreme angel Lucifer managed to win over a third of the angels to his side (even the statistics are known!). Then he turns into a snake and seduces the first people. That is, according to this teaching, there were two sins: the first is angelic, the second is human. And the main thing was the first, the second was its consequence – when the fallen angel turns into a serpent, crawls into the Garden of Eden and tempts Adam and Eve.

I must surprise you – there is nothing about this in the Old Testament, where it is said about the creation of the world. Let us begin with the book of Genesis: “The serpent was the most cunning of all the beasts created by the Lord God” (Gen. 3: 1). And where is even a word about the fallen angel? Right, nowhere! There is no hint that the serpent is the embodiment of the devil. The serpent in the ancient world is a symbol of chaos, evil. The Old Testament is written in the mythopoetic language, and we cannot properly understand the Bible without mastering it. Therefore, in this case we are talking about evil, which originates within Adam himself.

In the book of Job, in the translation of the RBO, the “enemy” invites God to test the righteous. So modern translators translated the word "Satan." And again, no reference to the fallen angel.

Isaiah 14:12 is a verse that is also used as a place confirming the myth of the fallen angel. “Here you have fallen from heaven, you, the star of the dawn, the son of dawn! You have broken on the ground, the conqueror of the nations! ”But from the context of the whole chapter, it is obvious that this is about the king of Babylon. The fourth verse says: “You will sing a mocking song about the king of Babylon: That is not the oppressor! That is the end of his rage! ”And then the appeal goes to the king of Babylon. And this appeal goes on until the twentieth verse: “They will bury the others, but not you, for you have destroyed your country, you have destroyed your people. Let the descendants of the villains perish and the name of them will not remain! ”What does the fallen angel mean?

In the 17th verse of the 28th chapter of the book of Ezekiel, the author turns to the king of Tire:

“You are proud of your beauty and you have lost your wisdom because of your brilliance. I cast you down to the earth, doomed you to shame before kings. " In verse 12, we read before this: “Man! Mourn the king of Tire and say to him: "Thus says the Lord God: you have been marked by the stamp of perfection, full of wisdom and perfect beauty."

Turn now to the gospel. “I saw Satan fall like heaven from the sky,” says Christ in the 18th verse of the 10th chapter of the Gospel of Luke. Again we turn to the context. “Meanwhile, the Seventy returned in joy and said:“ Lord, even demons are submissive to us in Your name! ”And He said to them:“ I saw Satan fall like lightning from heaven. Behold, I have given you the power to trample on serpents and scorpions and all hostile power, and nothing will harm you. However, rejoice not at the fact that the spirits are submissive to you, but at the fact that your names are written in heaven. ” Also here it does not follow from anything that Jesus tells the story about the fall of an angel in some distant past. This statement refers to this moment as a reaction to the words of the students. Christ says that now the forces of evil are being overcome, a force has emerged that can overthrow evil.

In the First Congregational Epistle of John there are such lines: “He who commits a sin is from the devil, because the devil sins from the beginning. For this the Son of God was made manifest, that he might destroy the works of the devil. " But even here nothing shows that the devil is an angel who fell from heaven. We see that in the text the devil is generally with a small letter. That is, here the devil is not a person, but a certain concept of evil, a symbol. The devil is the symbolic designation of evil and sin. The works of the devil are all evil that is done in the world, and this evil has come to destroy Christ.

In the Second Council Epistle of Peter, we read: “For if God did not spare the angels who sinned, but threw them into hell and delivered them into the caves of darkness to be under their guard for judgment” (2 Pet 2-4). It seems like about angels who have sinned. But it says here that they are all in custody for trial, whereas demons, according to the general opinion, must be active in this world to do evil, and they have yet to be punished. Therefore, it is not entirely clear what these angels have sinned. In any case, there is nothing said about Dennitsa, who rebelled against God, about the war in heaven, etc.

In the 12th chapter of the book of Revelation tells about the archangel Michael, who fights with the dragon. Revelation is generally the most mysterious book, as it is a collection of mystical revelations that are extremely difficult to interpret. In any case, the revelation tells us about the future, the war of the archangel Michael and the angels with the dragon will take place in the future. And the fallen angel, the devil, and Satan are not mentioned in the 12th chapter. The dragon is obviously also not a specific person, but a symbol of evil. The 20th chapter of Revelation mentions the devil and Satan, but speaks of their ultimate fate. Nothing is said about their origin.

The only place in Scripture that mentions the fallen angels is the Conciliar Epistle of Jude: “He kept the angels, who did not retain their original condition, but left their homes, in the dark, at the judgment of the great Day” (1: 6). But what did the author of the Message rely on, mentioning “angels who did not retain the original state”, because nowhere in the Scripture does it say so? Biblical scholars have established that the author of the Epistle took it from the apocryphal book of Enoch.

Nevertheless, in the Gospel Christ constantly casts out demons, and it is obvious that these are not just symbols. Christ expels some concrete power that works in people. What is this power? Where did she come from? We know that the source of evil was man. As we said above, the serpent is a symbol of the evil that originates inside a person. Therefore, there was only one fall into sin, and demons in a certain sense – the offspring of man. Although nothing concrete is said about the nature of demons in Scripture, we can conclude from the description that these are some impersonal "energies" that can seize man. Both from Scripture and from the Christian experience we understand that there is a certain spirit behind any sin and passion. That is why the Apostle Paul writes: the struggle we have is not against blood and flesh, but against the principles, against the authorities, against the masters of this world of darkness, against evil spirits in heaven (Eph 6:12). For the same reason, in the ancient tradition of announcing over those who wished to be baptized, exorcisms were read for a long time.

Why did Christianity so firmly included the legend of the fallen angel? The myth of wars between gods is one of the most stable religious archetypes. In most pagan cosmogony, we can meet stories about how some gods defeat others. For example, Baal defeats Ale, Zeus – Kronos. When Christianity went beyond Israel, the culture of the pagan world began to penetrate there. We cannot take the position of Tertullian and say that all pagan heritage is evil. After all, all our dogma (as well as all theology) is written in the language of Plato and Aristotle. But at some point, pagan notions seriously distort Christian revelation.